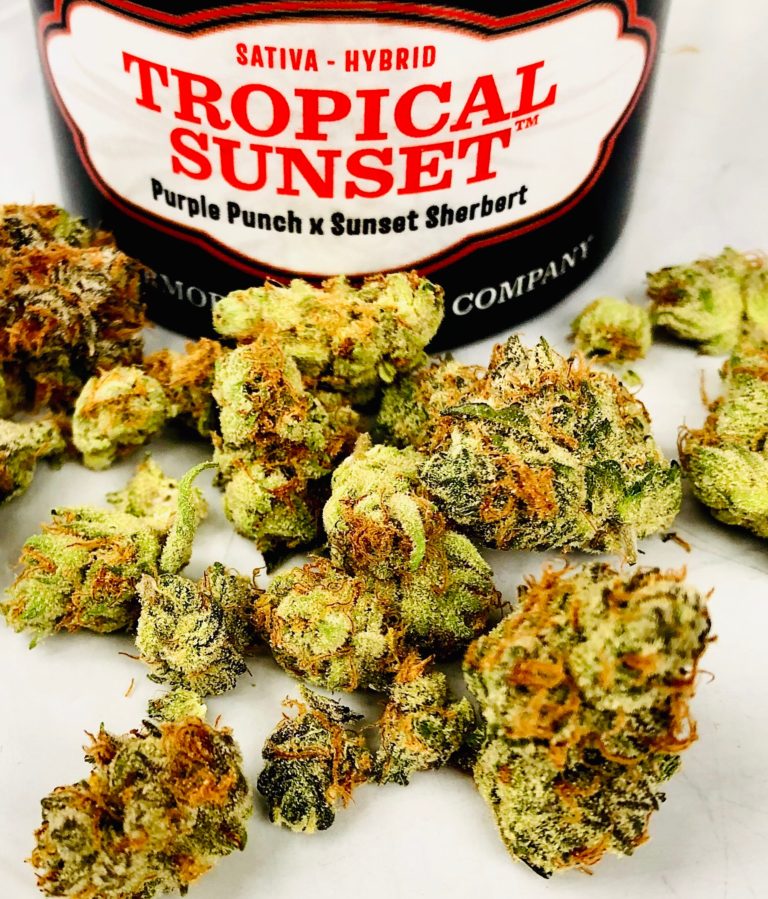 POTENCY: Med-high (THCa 25.57% THC 0.43%) + the presence of: CBGA, CBG, CBCA, TCVA and some less than common terpenes such as Borneal (anti- inflammatory/pain reliever) and Fenchol (anti-inflammatory) which really round this strain out nicely.

PHYSICAL APPEARANCE (consistency): very light green calyx covered in red, orange, and some white stigma (hairs) and encrusted with a generous portion of crystalline white trichomes.Good For Bowls and Rolls: this strain’s texture, consistency, and cured state (especially this particular batch) offer a medium equally suitable for rolling and smoking/ vaping. The small, popcorn-like buds, are fairly dense, yet because they seem to be freshly cured and perfectly dried they are easy to grind and roll.

TASTE:  thick berry, with tinges of pine and lemon with a hint of hash taste at times

MIND-
+uplifted feelings of euphoria and well being. (This is a very uplifting feel-good strain )

USES: treating anxiety, and depression.
I was able to enjoyably read, play music, and write in my journal all while medicating with this strain.  So, I would say it definitely lends itself toward creative focused endeavors and activities.
NOTE: This strain helps alleviate irritability or a “bad mood” in general.  I found myself instantly relieved after a day of cascading obstacles with increasing amounts of stress and frustration.  It just seemed to melt away.

This is a very nice sativa hybrid offering a balanced high that both mentally arousing and physically calming. The presence of CBD, CBG, and the levels of the terpenes found in this strain in general definitely intensify its effects.  I would most definitely purchase this strain again, and most preferably from Evermore. 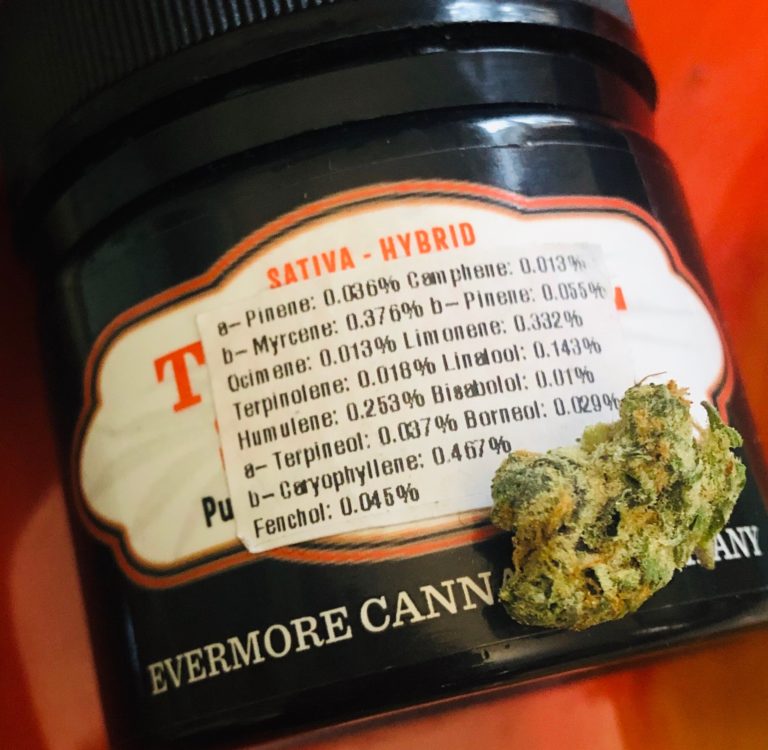 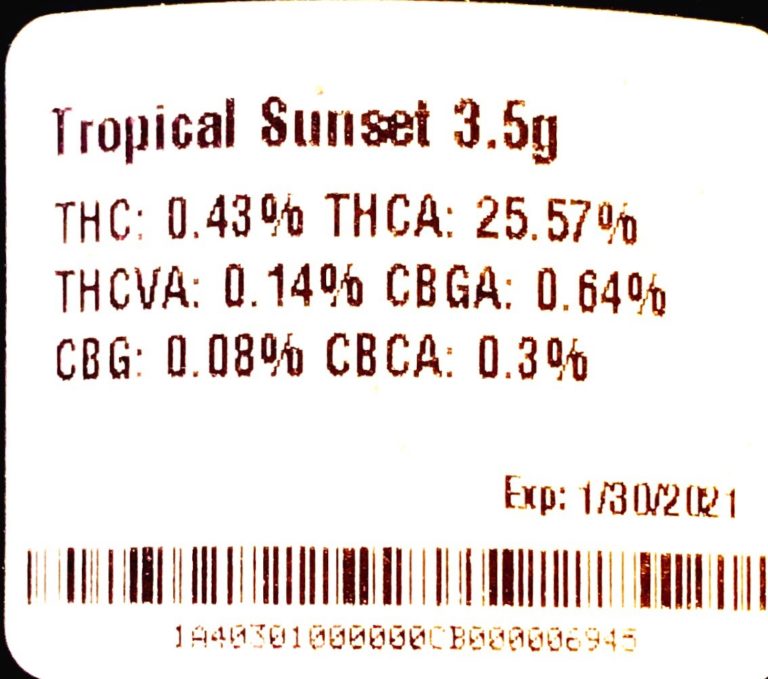 A CLOSER LOOK AT WHAT’S INSIDE:

Tropical Sunset’s lineage is comprised of two typically Indica dominant Indica/ sativa hybrids.  However, Evermore lists this strain as a “Sativa Hybrid” and its in-house labeling convention gave it an orange label, which, must signify the same.

Based on this, and even though the word “Dominant” seems to be missing in the label, Evermore’s version of this particular hybrid cultivar must be genetically, and atypically, more Sativa dominant.

Evermore’s designation would keep in line with effects that I personally experienced, and therefore is, I believe, aptly labeled.

The potency of this batch of this strain was medium -high testing (THCa 25.57% THC 0.43% ). This level of derived THC is a higher than what I think is normally seen… To me, this indicates: that even though this batch is at roughly 25%, there is a higher concentration of derived thc at 0.4%, compared to the average .1-.2%, and because of this, it delivers a much more concentrated, and thus potent effect.

Again, in my experience, or informed opinion, the ratio of derived THC to THCa found in this Evermore strain may actually offer more of an intense effect, or high than a strain rated at 30% THCa that is only deriving something like a .2% THC. 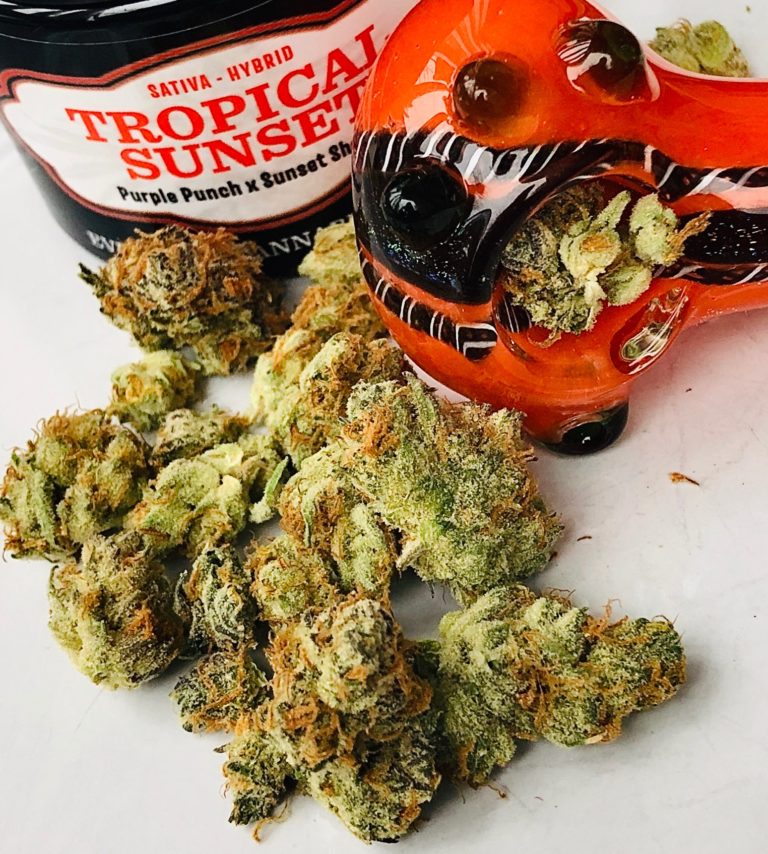 The effects of this strain seemed to be long lasting and rarely seemed to diminish, except for the onset of some physical relaxation as the initial, more traditional sativa effects, faded. Overall a very classic sativa hybrid  experience that offered sensations of euphoria, stimulation of thoughts and ideas, creative contemplation, which was tapered with a relaxing body high that was not in any way immobilizing or too sedative.

However, wish there was some explanation or insight into this on the label itself.
Evermore seems to also have mis-spelled the word Sherbet as “sherbert” but it is a common mistake so I won’t give them too much grief about it.

And speaking of the label, I appreciate its rather simplistic, innocuous, if not old-fashioned,  barbershop quartet aesthetic.  I say this mostly because its design is just below the line of what I would call unnecessary, frilly, wasteful, cost-increasing finery.

Strane may have the right idea (if it is indeed their motivation for their austere packaging): cutting down on ornate and unnecessary packaging and lowering production costs, and thus lowering prices.

I hope that in the future, Evermore retains its humble appearance by reducing the fluff even more. Monochromatic maybe? Just a thought.  I wish that it was my project to work on to be honest. Mostly because I thoroughly enjoyed the two strains from Evermore that I have tried.  And, because things like incorrect grammar on a label of a commercial product shouldn’t be tolerated as being “good enough”.

Let’s be honest, I’ve been receiving flower in every conceivable manner of ziplock and plastic baggie for decades, so it’s not like I even need a printed label for goodness sake.  I suppose I’m just saying, if you are going to go to all the trouble, at least spell it correctly.

My guess is that they realized the mistake after it went to print and could nothing about it. I want to believe this because it seems incongruent with the care and professionalism clearly taken when procuring this flower.

This may be some of the finest cannabis I’ve tried since receiving my card and I really liked the fact that it was so unassuming. It gave me the impression that they aren’t trying to impress or compete, they are just doing their own thing and getting really good at it apparently.

As stated in the conclusion, I would definitely purchase this strain, and most preferably  from Evermore Cannabis Company, who I feel may be changing the game with the consistency and quality of flower I’ve experienced from their most recent and current cultivars like Strawberry Cookies, Blue Cookies, and, of course, Tropical Sunset.   These strains, although not screaming with high altitude THCa values, a rich with terpenes, some not often seen, and higher levels of CBD than found in other strains of flower with higher overall THCa levels.  Basically, they are producing a very genetically streamlined, expertly grown and procured flower. Bravo Evermore, Bravo. Keep ‘em coming.